They told us it would be hard to leave Hot Springs, and they were right. We stayed for one night at Laughing Heart Hostel and just didn’t quite feel rested after a full day of running errands, so we decided to stay again, this time at Elmer’s Sunnybank Inn. Elmer’s is an historic house dating back to the 1800s, and Elmer has furnished it with antiques and an eclectic mix of artwork, framed poetry, and an extensive library of books ranging in subjects from Buddhism to the Appalachian Trail to vegetarianism and cookbooks. Sunnybank has been hosting thru hikers since long before Elmer owned it, in fact hosting the very first thru hiker to ever complete the entire AT, Earl Shaffer, way back in 1947. The room Earl slept in was marked with a plaque, and happened to be Travis’ room while we were there, which is surely good luck. 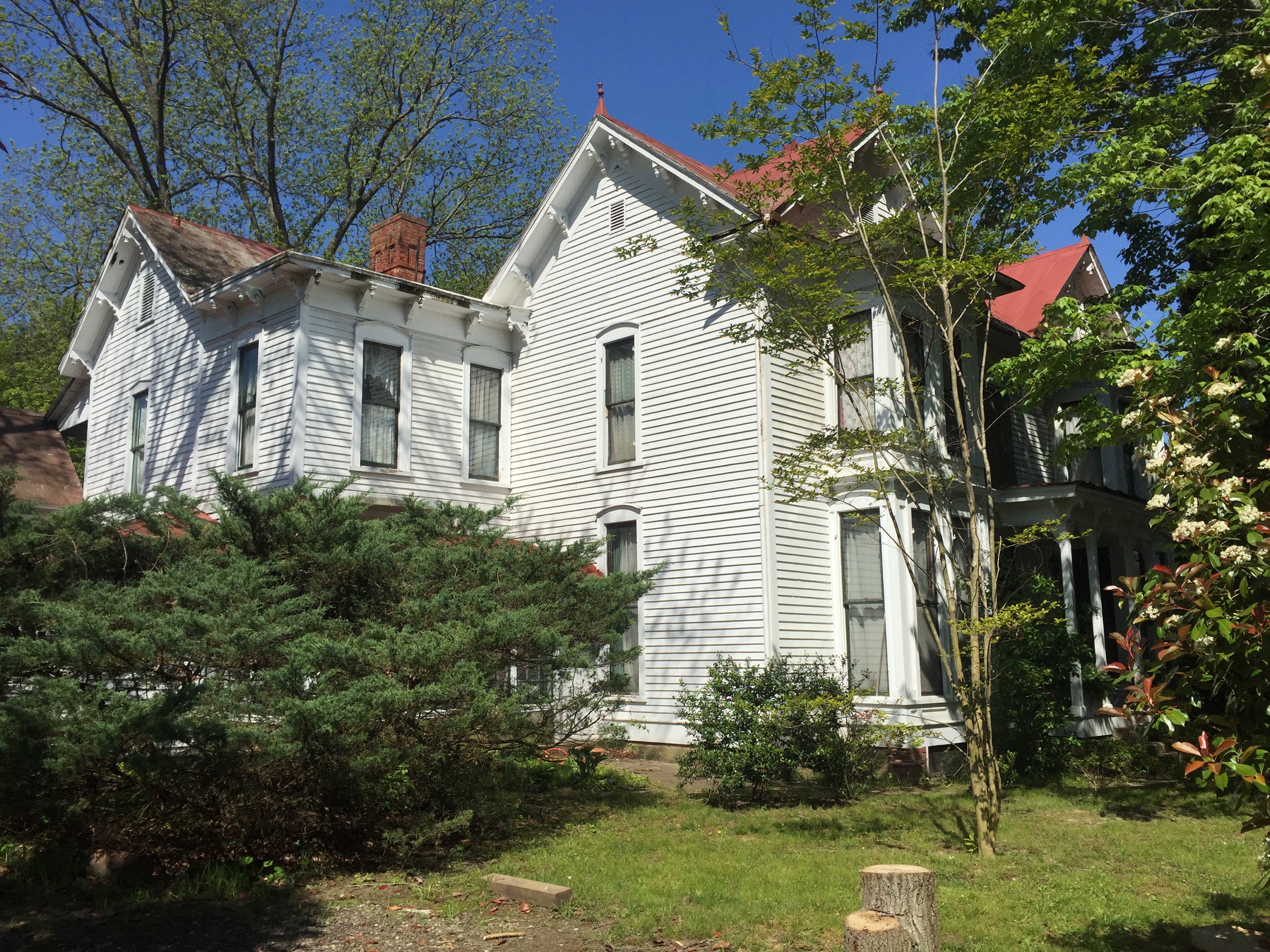 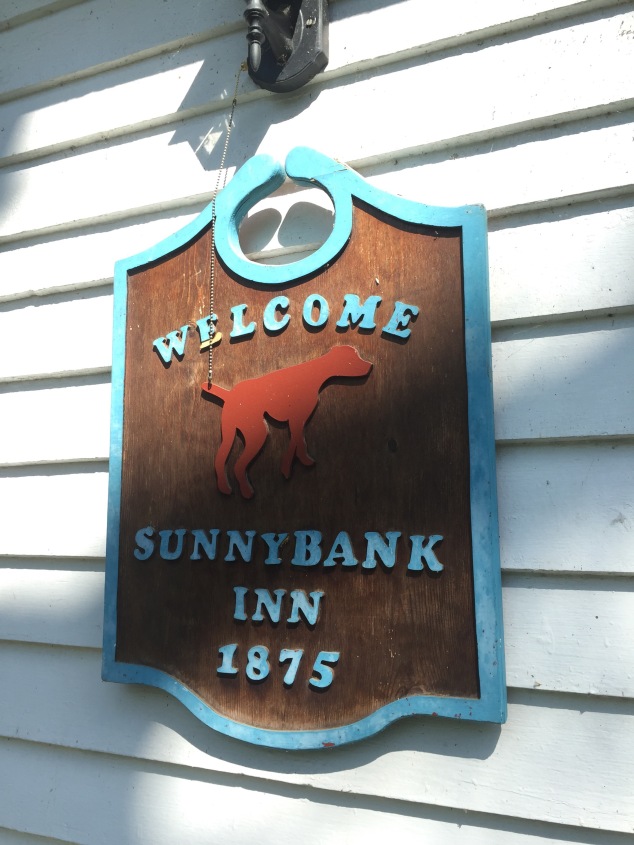 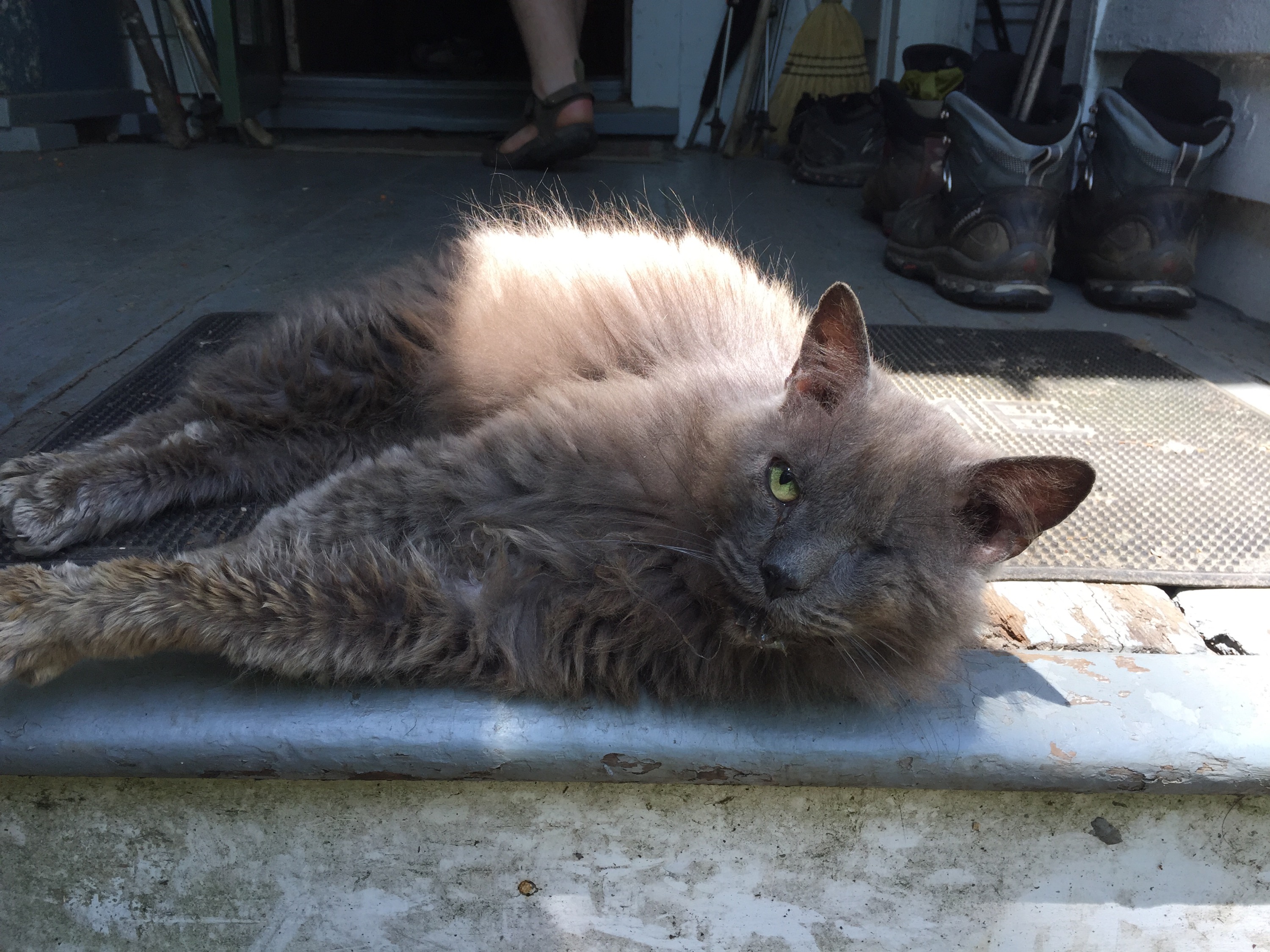 Guests could sign up for Elmer’s famous gourmet vegetarian meals, which of course, we did! He made a hearty squash and mushroom stew, a huge salad with vegetables we hadn’t even seen in weeks, let alone eaten, an enormous spinach and cheese lasagna, and lemon blueberry pie for dessert. Buffets may be tasty, but this meal was satisfying in a way four plates of biscuits and gravy never will be- it was real, homemade food with nutrients and vegetables we had been seriously lacking.

This day was also the last day of the music festival I mentioned before, so we made a trip down the railroad tracks to check out the bands and have a few beers with the hikers who were stealth camping at the festival grounds. Usually we’re in bed before dark when we’re hiking, so our 10:30 return to Elmer’s was a late night for us, and let’s just say we were not exactly feeling at 100% hiking capacity the next morning… So we decided to stay one more night at Elmer’s! His breakfast of fruit, granola, and homemade biscuits and mushroom gravy was just what we needed. 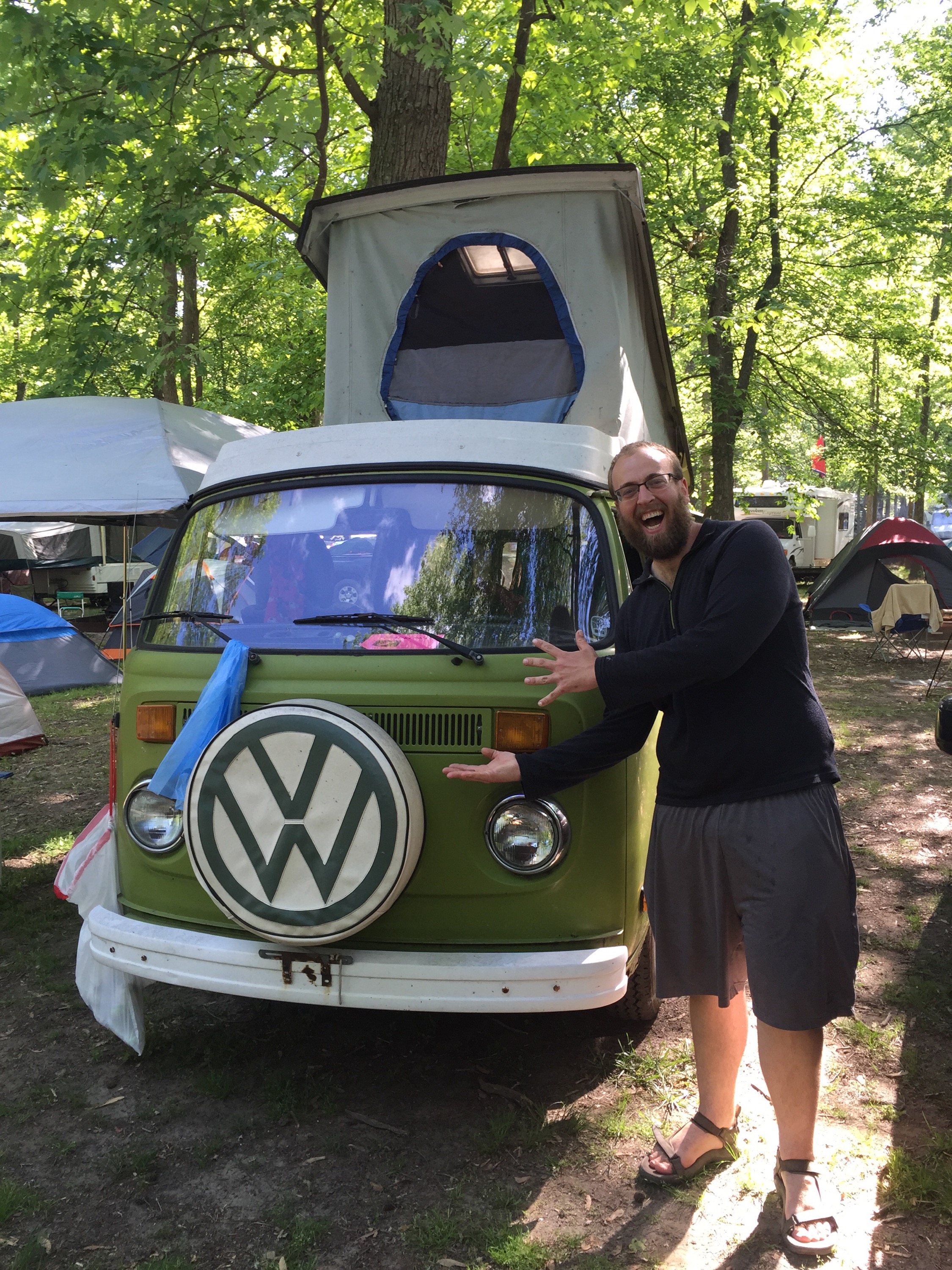 Shane found his dream van at the music festival!

Elmer has a few helpers at the inn, and two of them were guys our age who were starting a small farm on a piece of property Elmer owns out in the mountains. They offered to show us, so we hopped in the bed of their pickup and rode out to Elmer’s second piece of heaven in North Carolina. The boys lived in an off-the-grid cabin Elmer built long ago, and were working hard to clear the land and grow vegetables for the farmer’s market. It was a nice day trip that made me want to get my hands into the soil to grow something of my own again. 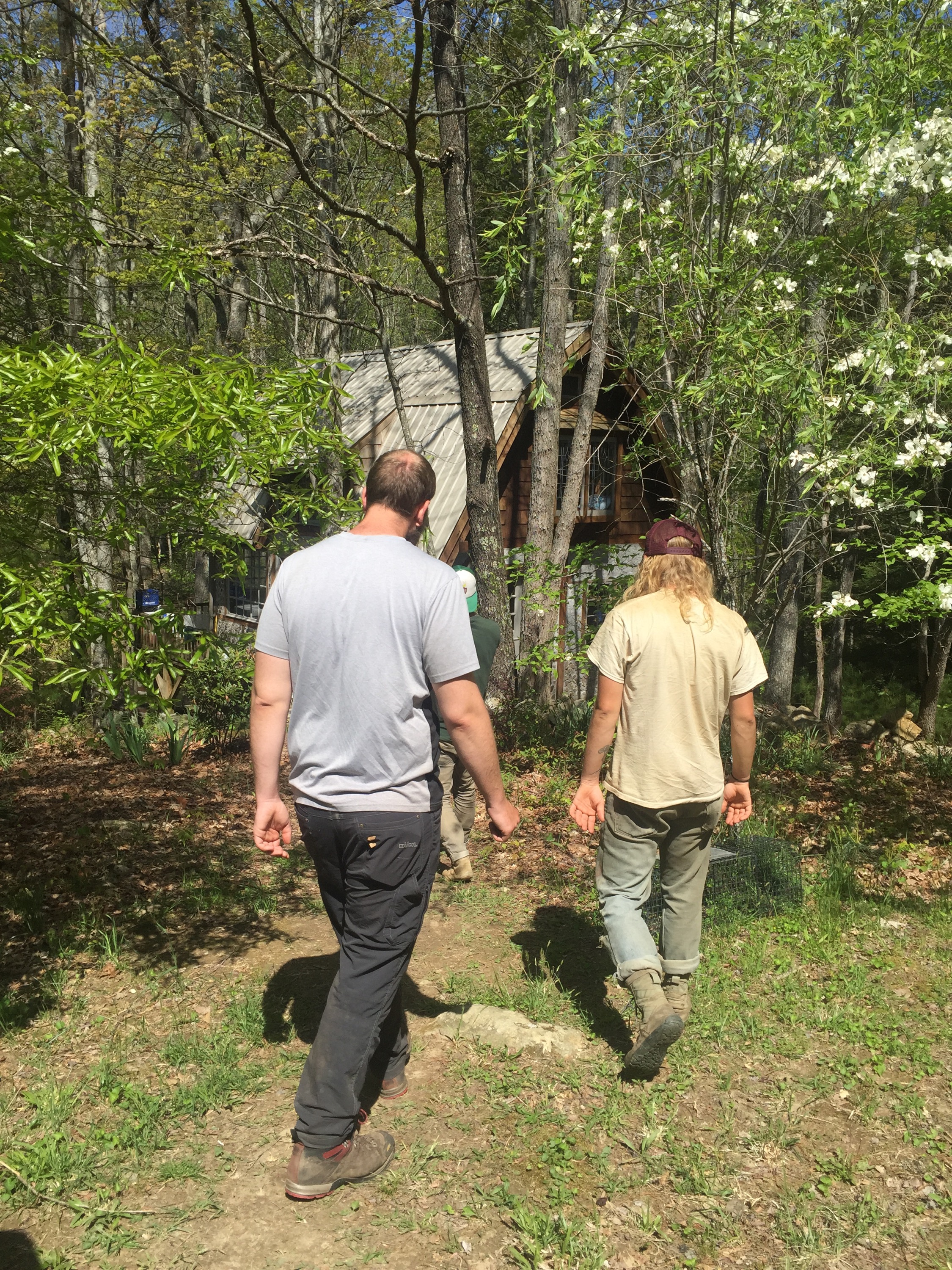 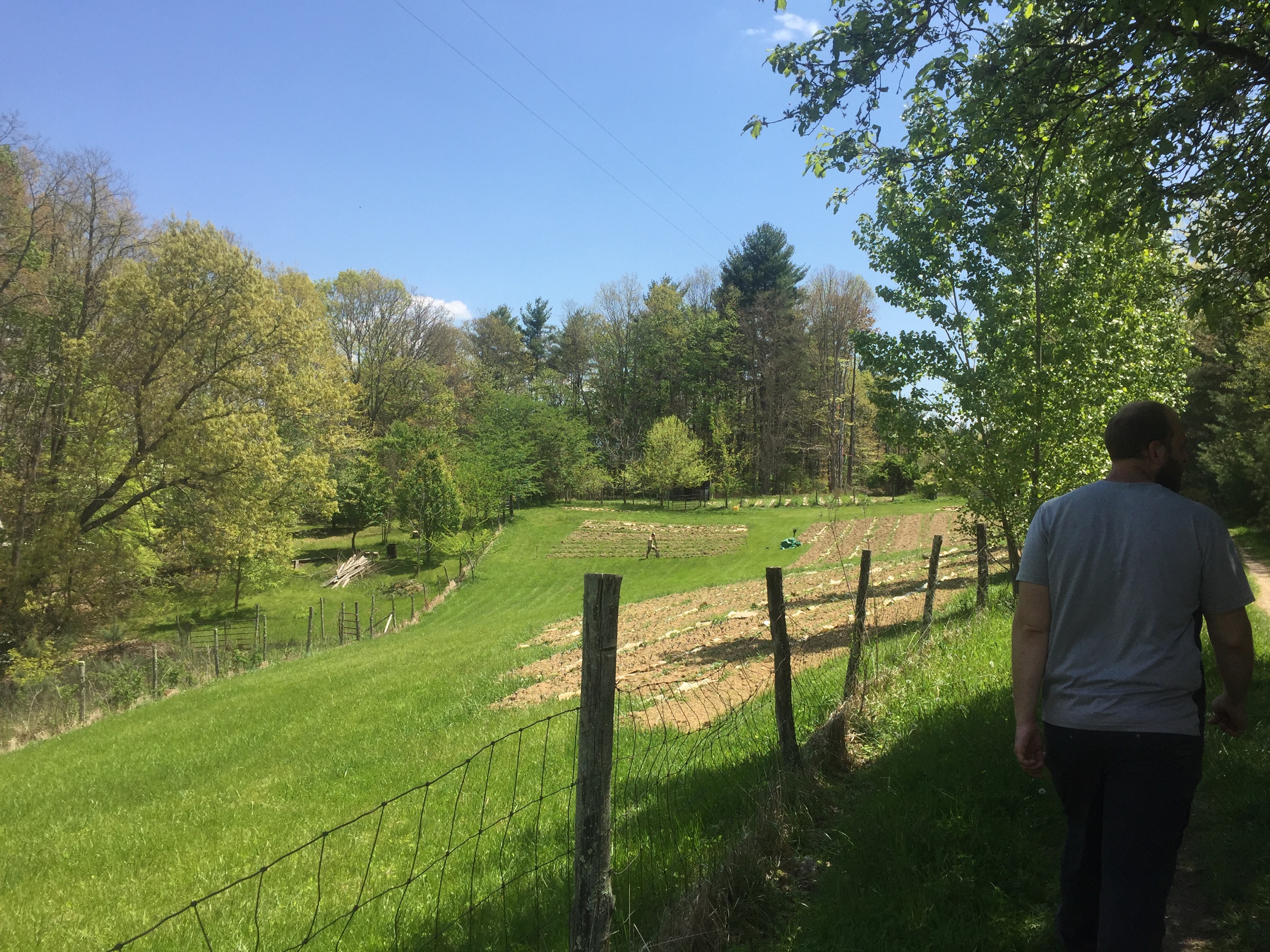 When we returned to town, we visited the hot springs of Hot Springs, since it was about the last thing in this town we hadn’t yet done. There was a spa that had secluded outdoor hot tubs that were fed by the natural hot water from the springs. For an hour you could sit in the tubs of warm water (supposedly with healing minerals) and look out over the river, which was a nice way to wrap up our time in Hot Springs.

When it was finally time to head out, we packed up our things, said goodbye to Elmer and Smokin, made our last walk down the main street, and up out of town. Hikers always say leaving town is so hard because your pack is heavier from resupplying food, and it’s usually uphill since towns are generally located in valleys. Hot Springs was especially bad, partly because we’d taken three days off and mostly because the next ELEVEN miles were uphill, and it was hot out for the first time. My shirt was soaked through with sweat in less than half a mile, and all I wanted to do was go back to Elmer’s!
But as usual, we got back into the swing of things pretty quickly. The next few days were the warmest we’ve had thus far, and we had a scare one morning when we had camped with little water and were counting on hitting a spring within a mile of our campsite the next morning. Though it was listed in our guidebook, all of the springs on the mountain seemed to be dried up, and it was already more than 80 degrees at 8:00 am, with the sun rising higher and us with less than a liter of water between the three of us for six miles until the next shelter. We had begun to enter panic mode when we finally found the stream, much farther down the mountain than listed in the book. We learned then to fill up whenever possible at water sources, even if it means carrying the extra weight for most of the day, just in case.
The day before we reached Erwin, TN, we hiked our longest day so far, pulling in 19 miles…so close to the coveted 20 mile day! And we sort of did it by accident. We hiked 16 miles and only wanted to go a little farther, but it turned out the next three miles were nothing but ridge line, without a single flat spot to speak of. It ended up getting dark just before we reached a gap with a campsite, and by then we had gotten out our headlamps to continue on in the dark. It was a long and tiring day, and we just wanted to set up our tents as quickly as possible in the dark and sleep, but wouldn’t you know it, a very noisy bird was perched directly above us and decided that 2:00 am was a great time to practice its mating calls… FOR FOUR HOURS STRAIGHT. We later learned that it must have been a whippoorwill, which makes me understand that Randy Travis song much better. I guess he couldn’t think of any lyrics that rhymed with ‘incessant obnoxious chirping.’ I don’t know if whippoorwills are protected in this area, but if it was up to us, it would be open season all year long.
It was a relief to make it into Erwin after a sleepless night. We took a zero day at Uncle Johnny’s Nolichucky Hostel, where we had a cabin with a VCR and a collection of VHS tapes. We spent the afternoon watching cinematic masterpieces of Men in Black, Terminator II, and Kindergarten Cop. We also met our new friend, Wolfy, the likes of which I’m glad I haven’t seen in the backcountry yet, even though I know they keep the pesky bugs away! 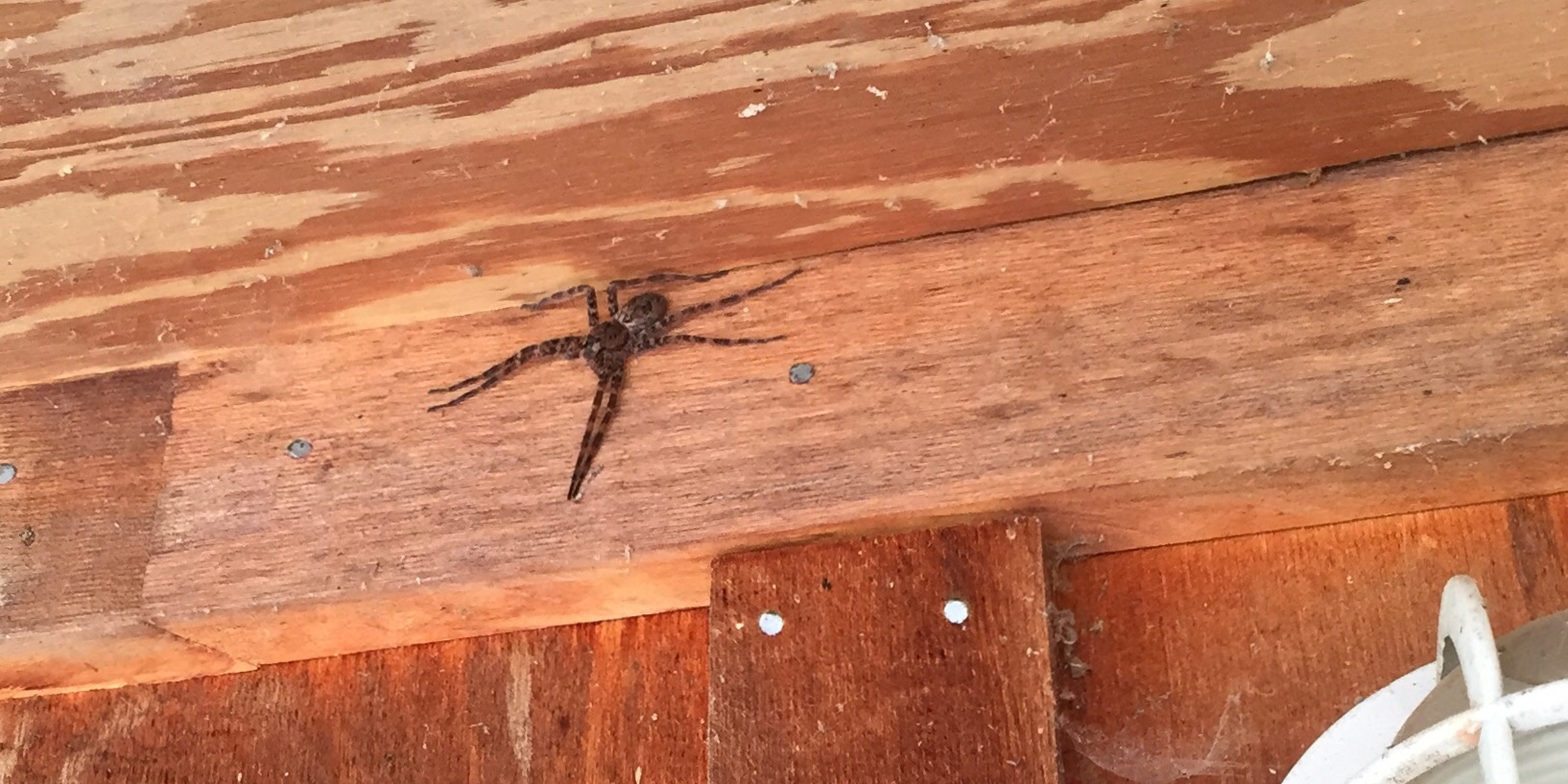 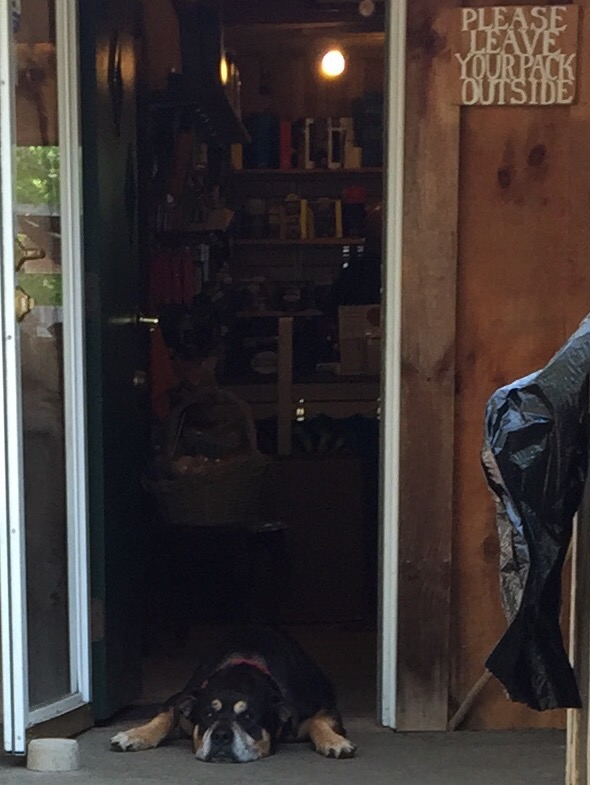 Uncle Johnny’s also had a guard, but I think he would’ve lost in a fight with Smokin.

On our zero day we rented bikes from Uncle Johnny and took the bike path into town. We rode along the river and then took a little detour down a few backroads, over some railroad tracks, through a vacant lot of bushes, and voila! We were at the KFC Buffet! It’s funny how we always seem to end up at a buffet one way or another. 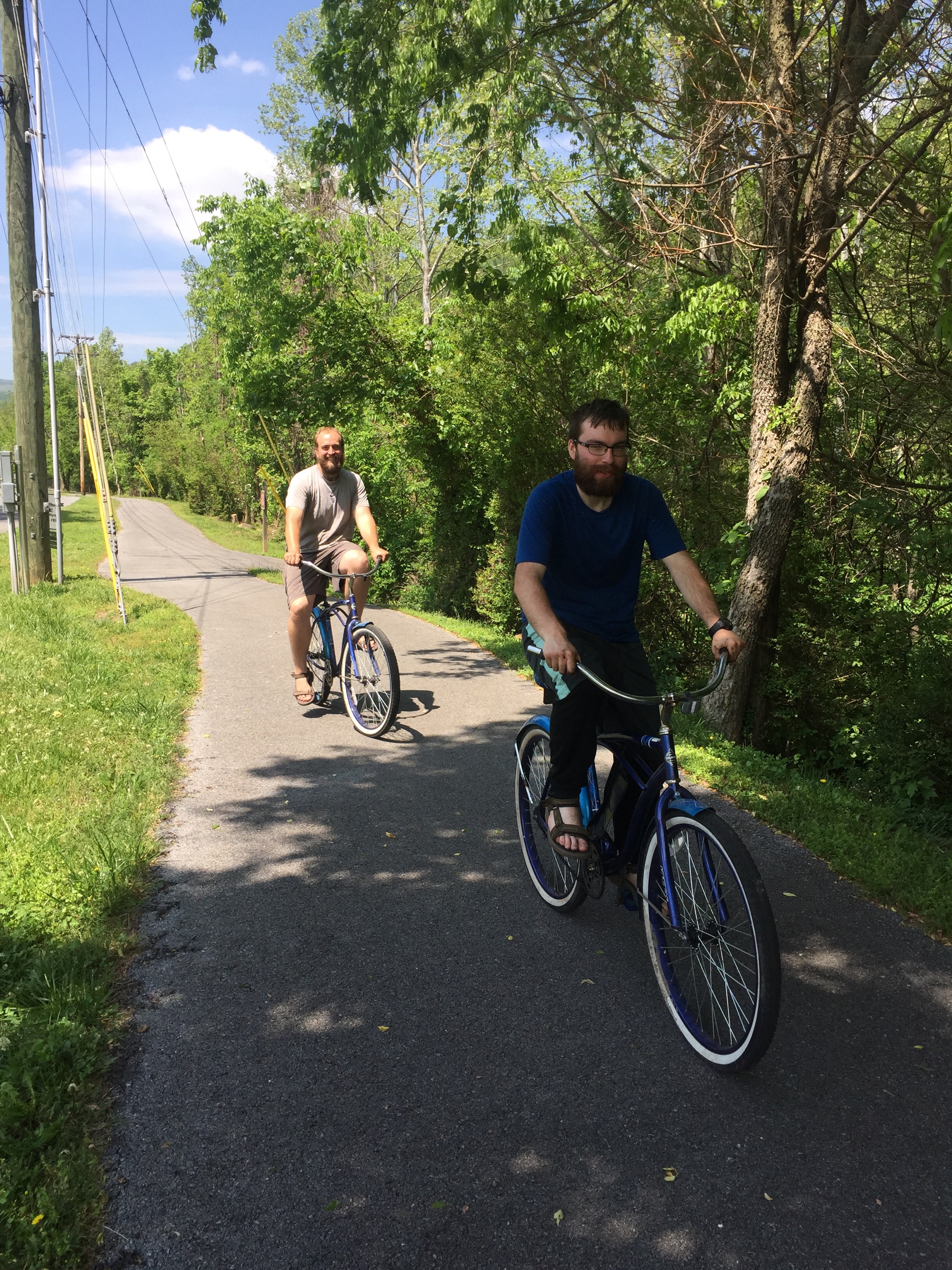 How adorable are they? 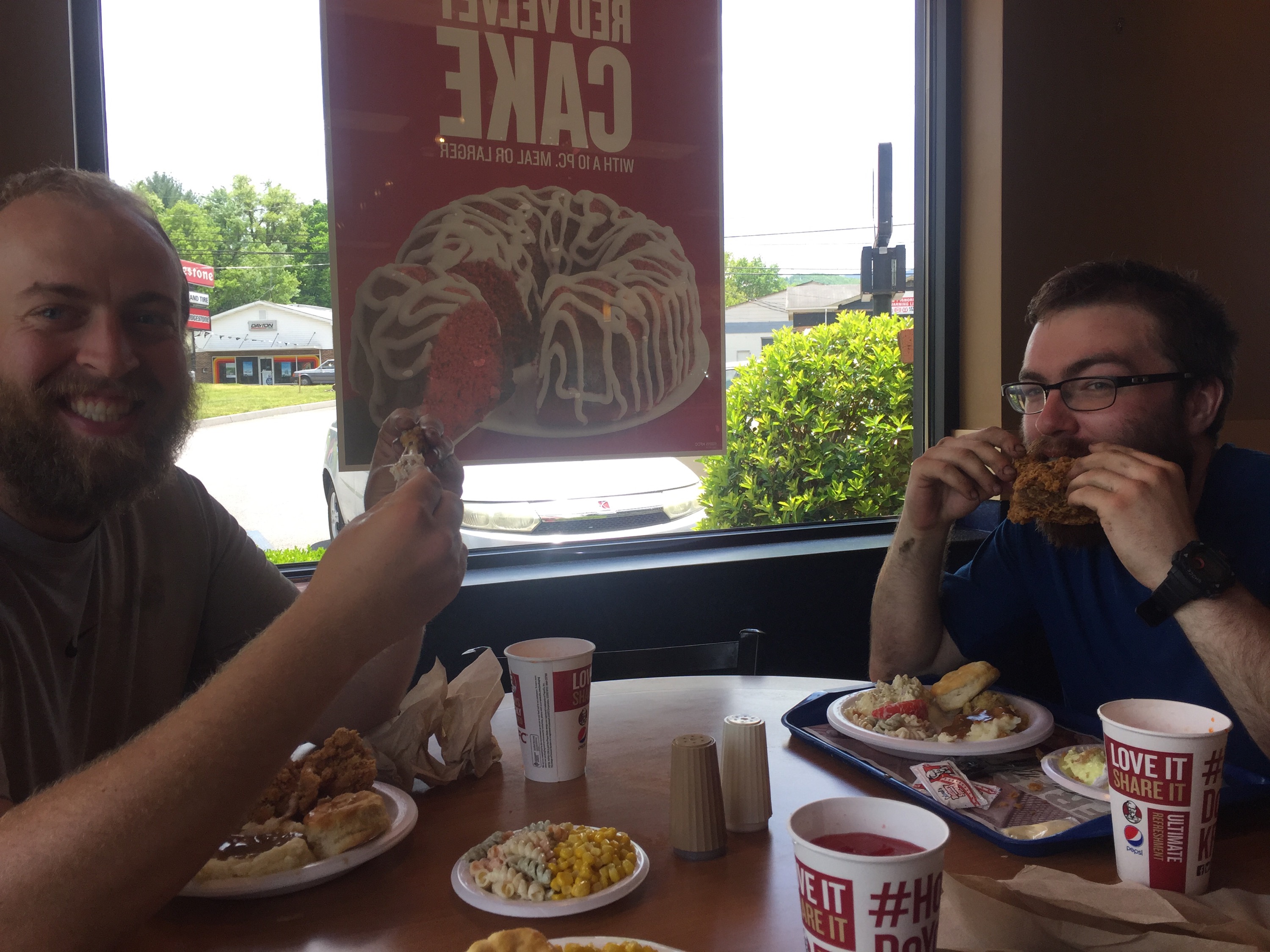 After the buffet, we rode down Main Street in town, where nearly everything was closed because it was Sunday. We went to the Capitol Theater, which is an historic movie theater maintained as it was when it was originally built- they only had two movies playing on the small screens, but it was a neat experience. We saw the new Avengers: Age of Ultron movie, and it felt strange to be back in an air conditioned theater eating candy and reclining in leather seats when yesterday we had been hoofing it  up a mountainside. 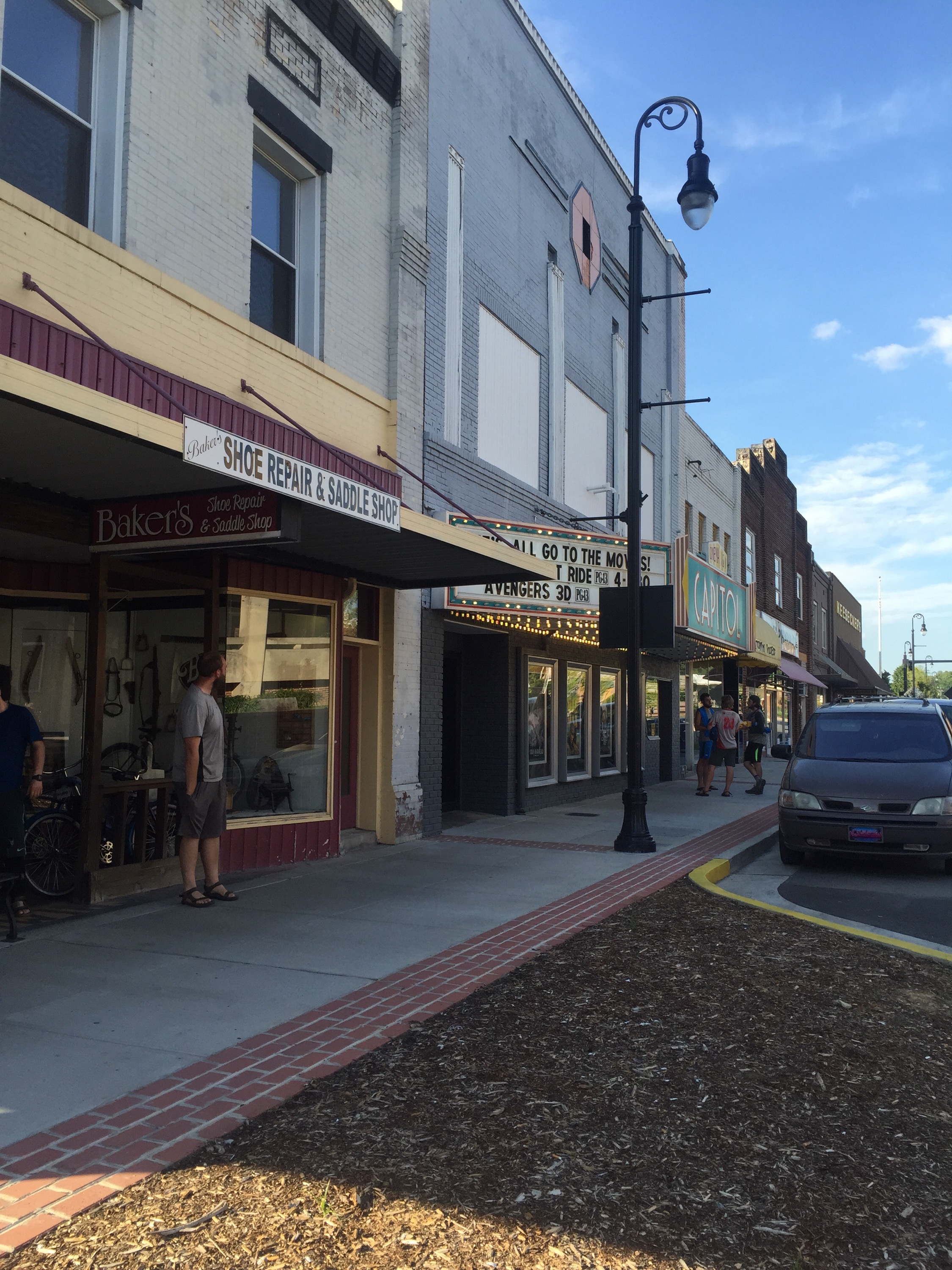 We also stopped by the post office to shed some unnecessary weight. Shane and I mailed home winter clothes, and Travis sent back 8.5 pounds of camera equipment that he wasn’t using often enough to justify carrying the extra weight. He’s practically skipping down the trail now that his pack is so much lighter! Even the 2.5 pounds that I sent home feels like a big difference in my pack weight. Speaking of weight loss, we have lost a combined total of over 60 pounds since we summited Springer seven weeks ago, and surely gained lots of muscle in its place. We’re just zipping along now!
It was so hot the next day that we decided to wait until the afternoon to leave Uncle Johnny’s. A few short thunderstorms rolled in and passed, and it cooled down a bit, so we left, thinking the weather would be nice for the rest of the evening. We were wrong. Only a couple miles out it stormed with torrential downpours, thunder, and lightning as we made our way up to the nearest shelter five miles away. My boots squished out water with every step, and it took them three whole days to dry out. I got some nasty blisters despite stopping every few miles to take my boots and socks off to let my feet air out… But nothing compared to Travis’ feet! He has had blisters since we began, and rather than callous over, they seem to be getting worse, growing smaller blisters on top of bigger ones. He officially lost his first toenail this week. During a break when we had our shoes off one day, a German hiker who hardly speaks any English leaned over Travis, snapped a picture of his feet with his camera, and said, ‘I take photo of that.’ If you’d like to see them for yourself, scroll at your own risk… It’s pretty graphic. 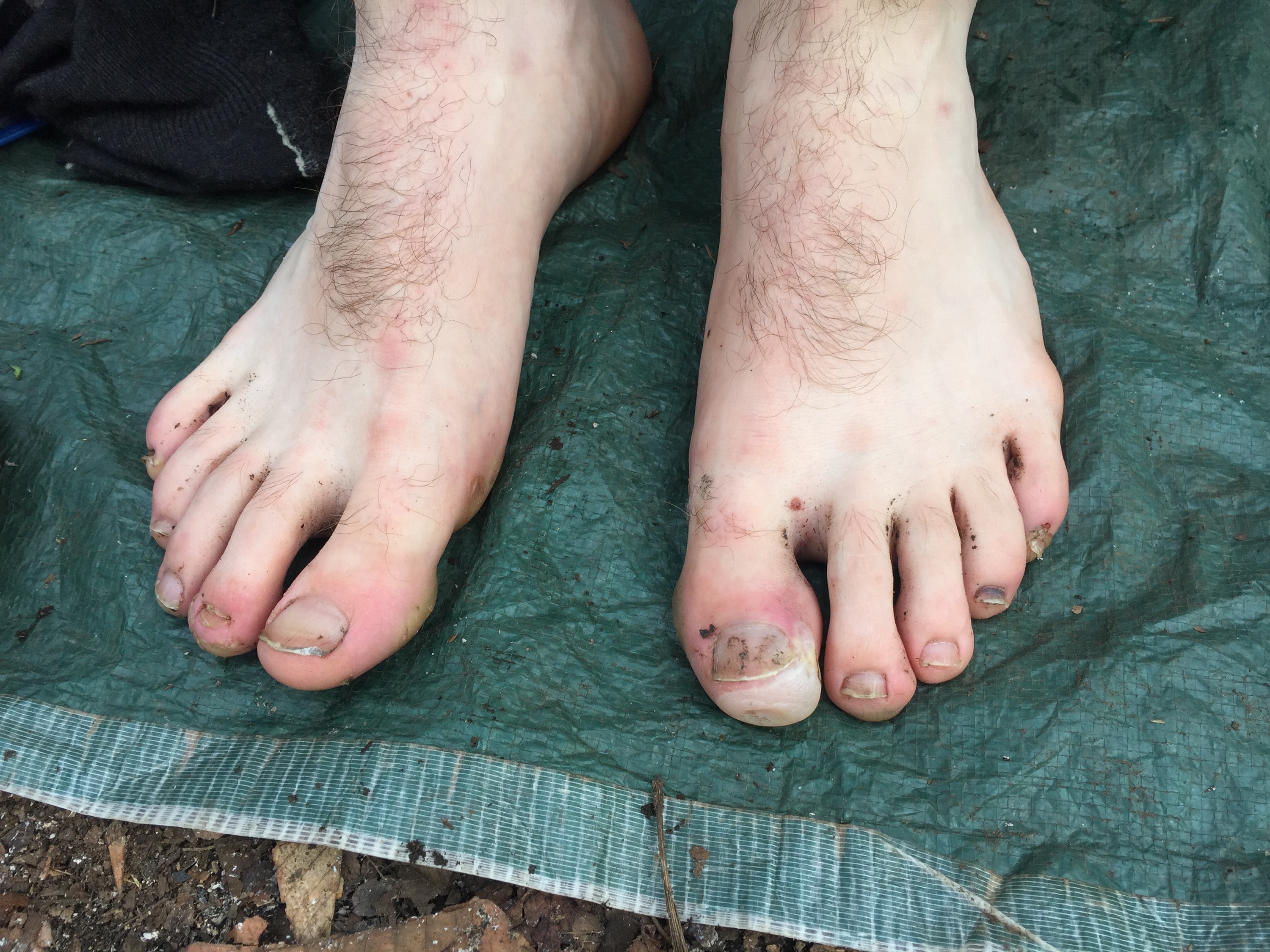 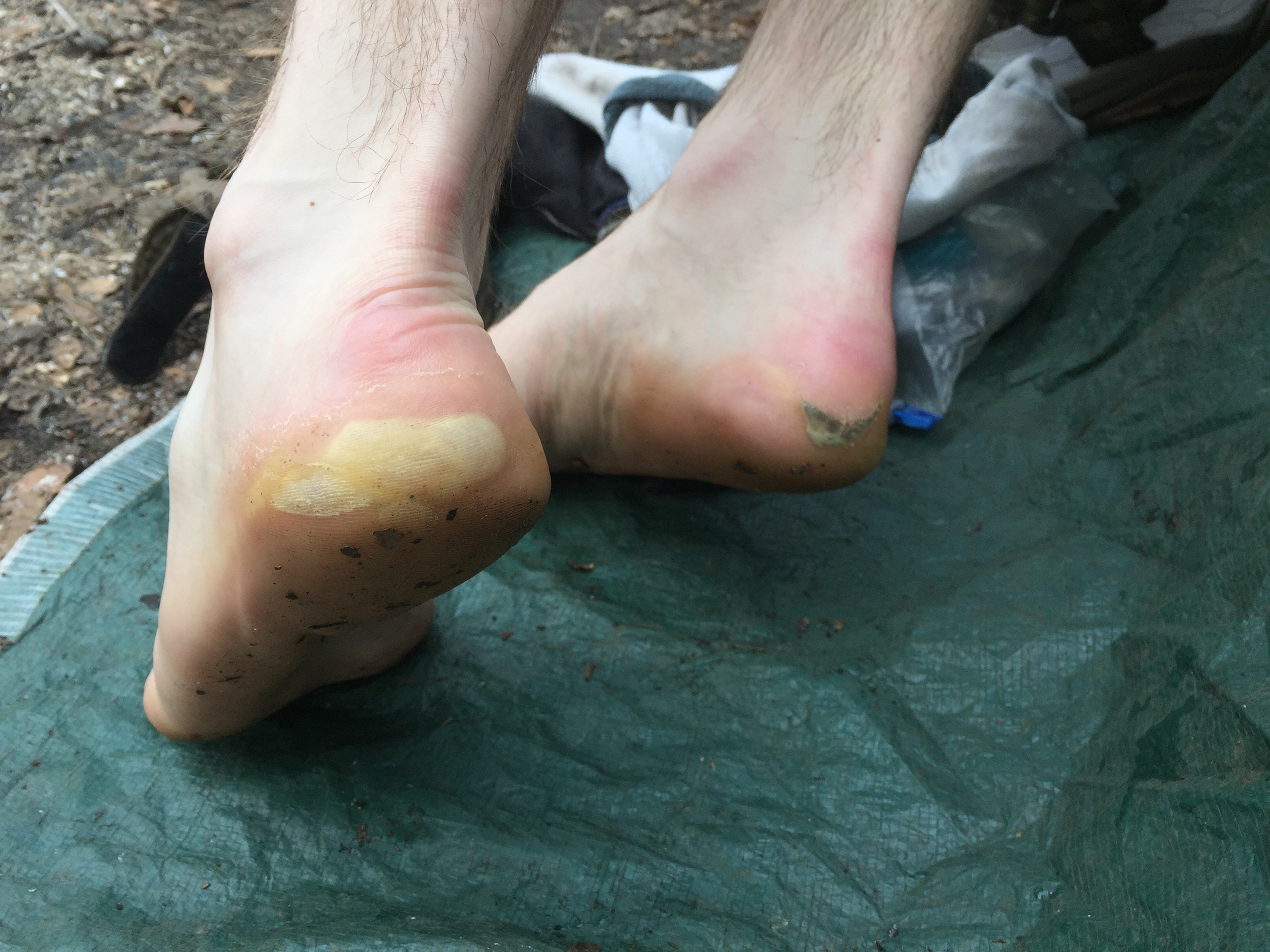 While our feet were horrendous this week, the views from Round Bald and Jane Bald made up for the pain. The wildflowers continue to bloom and fill the air with their sweet aroma, which is nearly enough to make you forget about the skin peeling off of your heels and toes with each step. The Highlands of Roan were as majestic as their name implies, with views of the surrounding mountains stretching for miles into the horizon in every direction. It felt like being on top of the world, which is how I usually feel out here, even when there aren’t any views. 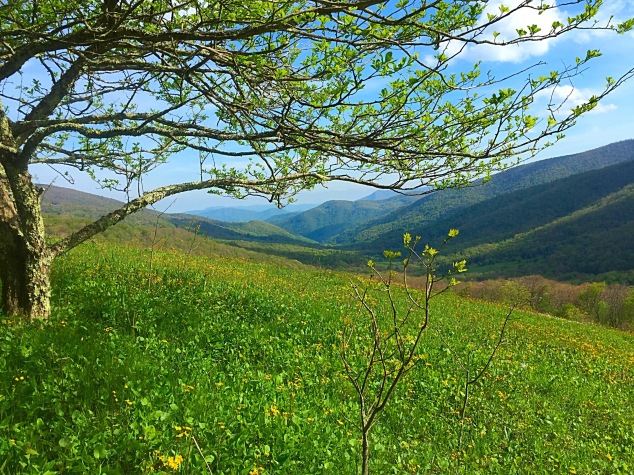